Hey ya’ll! Hope everyone had a great month! It was way too warm over here, so occasionally I felt like I was melting. Nevertheless, I’m still here to deliver you this wonderful little monthly blog post~ 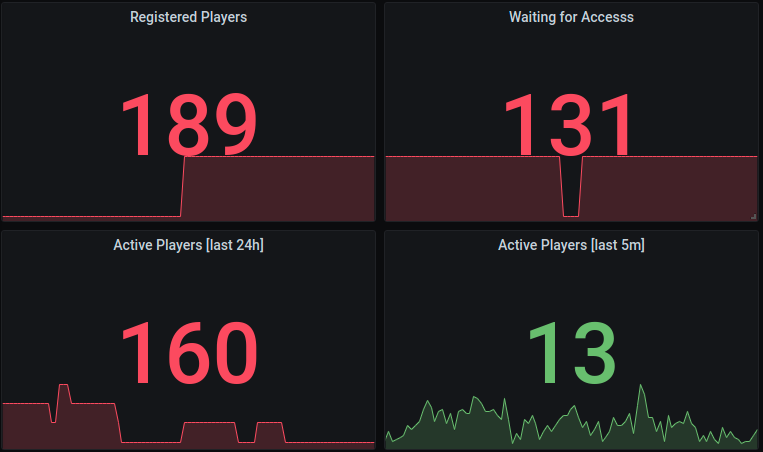 So far, a total 189 players entered the alpha, whilst another 131 are waiting for access. Those numbers are huge!

I never really expected to have a three-digit number in that waiting queue and have been a bit overwhelmed by it at first. After thinking about it for a while, I believe it’s okay to have such a high number there, as long as I make sure to keep letting people in, so allow me to make this clear: everyone in the queue will receive access to this alpha at some point! Guess in the final two weeks we’ll have a big stress test where I’ll just let everyone in, and afterwards I’ll need a small break and then we’ll launch into the open beta.

By now, ~25 people already stopped playing again. That puts our retention rate at around ~90% for the time being, which is yet another really big number. I might eventually try poking them with surveys to find out what caused them to stop playing, but from what I can see from the data I have, most of them where not part of a guild – the social factor is strong in this game, especially with guilds making up about half of the gameplay! So as noted in an earlier blog post, it might make sense that single players are struggling. I’ll increase the priority to implement some sort of “guild finder” or recruitment board in hopes to mitigate that issue in the near future.

Alongside the playercount, Patreon🡕 donations also increased: we are now at about 50€ per month! About 1 buck for every 3 players in the game, which gives me hope that this entire thing might work out in the end… although I believe this is unlikely to scale linearly. But let’s see. :D Thanks to everyone who supported me so far. <3

Turns out I screwed up a handful of things when adding Accessories and had some minor balance mishaps, so there have already been 48 smaller updates addressing those since the alpha started, accompanied by a handful of small quality of life changes such as the perk rework.

A look at level speeds

According to the leaderboards, some players already reached the level 20-30 range. I feel like after three weeks of focusing mainly at one activity, that’s a good pace if I could keep up with content. Luckily (for me), things should now slow down as the soft level-cap begins to kick in after 25, causing level ups to increase significantly in experience requirements. With the EXP Curve as it is right now and no soft-cap in place, I’d expect ~2 months of active gameplay to reach level 50. Providing content up to that point might be a good goal for the open beta launch. :)

Seems like a week ago Telegram’s Bot API had an outage lasting for a bit more than an hour. While not a big problem per se, stuff like that is really annoying as I’ll receive loads of messages from players who rightfully think the bot itself is broken – which, in fact, it also was! I forgot to handle the case where telegram might not respond to any requests, so for the entire telegram outage the service managing the communication with Telegram was going through an infinite crash-loop. Fixed that for the future, even though it should not matter much as it doesn’t really make a difference. One more reason to go standalone one day. 🙃

Now that all (or most of) the issues appear to have been fixed, I’m back at adding bigger features – namely companion evolutions and more adventures. Let’s take a look at those!

Some monsters will receive very simple evolution lines (Baby Zard -> Zard -> Li-Zard), while others will receive multiple evolution paths (Goblin (new) -> Goblin Warrior / Goblin Sorcerer / Goblin Shaman). This will allow for more customization or a better specialization on some sub-role later on. I might also add some way to devolve companions in the future, if that ever becomes a concern when I add new evolution branches.

Evolving a companion will require a certain companion level and maybe other stuff like gold or materials. Still wondering if I should also add Consumables or Weapons/Armor as part of that evolution “recipe”. Either way, when you evolve your companion, it’s Level, IV and EXP will (obviously?) be preserved. Additionally, /fuse will now work as long as the monsters are of the same evolution line – so you can now fuse your Goblins into your Slayers and such.

We’ll start with a small set of existing companions to see if the feature works as expected and gather feedback. At some point down the road, the Starter Dragons will also gain new forms.

If truth be told, ever since reworking /assignCompanion, I feel a bit like I set a new standard to myself in terms of usability – so my true endgame here would be to have every command be as interactive as possible, thus requiring less input.

With evolutions, I plan to achieve this in two ways:
a) just entering /evolveCompanion displays a list of evolvable companions which the player owns
b) The command can be invoked for every companion (where applicable) through the companion overview
Both ways lead to a finished evolution by just clicking buttons or command links – so no need to manually enter (or remember) weird IDs and such, which feels like a big win to me.

I’m still too slow at coming up with new content

Ah, an old problem which still remains unsolved: the lack of content at higher levels. The main issue here is that I just have some weeks when I’m super uncreative, and then other weeks when I’m oozing with creativity. My aim right now is to release at least one new adventure per week, and I hope I can achieve that – and as more people reach level 15+, that really needs to be done soon. :D
So yeah, if you are level 18+, prepare to explore the fiery Caldera this weekend!~

Aaaaand that’s it for this month’s blog post! On a side note, I might also do another dev/design stream some time soon, last time was really fun. :D