In a world where adventurers die over and over again only to be reborn in town, bodies are fleeting - but the adventurer soul grows stronger with each fight, be it a win or a loss. Thus any activity - gathering, adventuring and crafting - will now give you soul experience and having a higher soul level benefits your gameplay directly!

For each level, you’ll receive one Stat Point which you can freely allocate. Want more health and stronger defenses? Go get some. Want to be a glass cannon that bursts anything with high damage and a huge mana pool? You know what to do. Can’t decide? There will be (rare) consumables allowing you to reset your points. 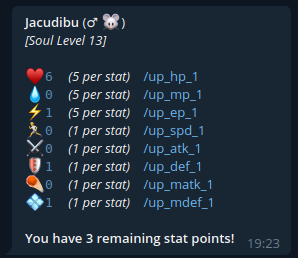 (as always, numbers are subject to change)

Besides directly making your character stronger, those levels will also have some other benefits, like bonus experience to make you level up your low-level weapon proficiencies faster or a growing stamina pool.

…wait, did I just mention stamina?

Chatventure now has a Stamina System

I guess Stamina Systems in games are a controversial topic - players who are on a roll and don’t want to stop playing hate them because they’ll eventually run out of stamina, but for developers they are an easy way to hinder their players from progressing too fast. Nothing is worse than when players reach that point where there’s just nothing left to do and new content is still far away on the horizon. If you shorten the timespan in which stamina is automatically regenerated over time, newer players will also have an easier time catching up.

While most games also offer a refill for some amount of cash, I’ll use that as an ingame resource sink instead - put away those pitchforks, there will be craftable consumables that refill your stamina! And to top it off, long-duration gathering trips will actually restore more stamina than they consume, so if you prefer the idle aspect of this game, you’ll be able to get that. Oh, yeah, the duration of your gathering trips is now adjustable, ranging from 20 to 180 minutes. 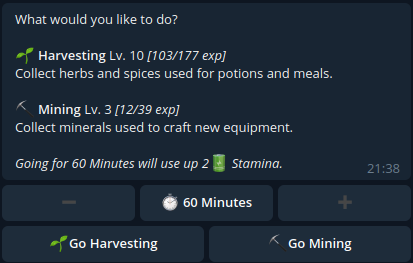 In the past weeks I’ve also changed the way companions are acquired. Last year it was a fun april fools joke to make monsters just catchable like in a certain other franchise - but lore-wise that just feels off. So instead you can now get them through special encounters during your adventures. Stealing dragon eggs must be a fun pastime activity!

My todo-list is slowly running out of bullet points and after some fluff here and there all that’s left will be adding more game content and tests. Speaking of tests, I’ll probably start stress testing next month, so stay tuned for that!

That’s it for this week. Hope you have a nice weekend! :)