Oooh boy, what a month! Back when the playtest started a few bugs emerged that I didn’t catch on my own, but luckily most of the where pretty easy to fix. Given the rather small and easy to expand nature of the game, there have been 52 individual updates so far – fixing bugs, adding features and getting rid of the occasional typo.

In total, 74 players joined the playtest so far. Most of those are still active - only 4 haven’t played the game over the last three days! At any time of the day you’ll already find someone playing the game more or less actively. I’m really blown away that people seem to enjoy it that much! :)

The biggest update this month was probably the introduction of the /fuse and /powerup commands, allowing players to power up their companion’s stats by either fusing other companions of the same type into them or spending souls & gold for a direct levelup. Unnecessary to say, the amount of companions in the database dropped by more than 50% after I made the command public. 🙃

While I don’t think that I’ll ever achieve perfect balance, I think I’m slowly getting somewhere that’s acceptable. Thanks to all the feedback I got so far there were 3 balance patches which improved things quite a lot. That’s where the Data Editor finally shines: It’s just super easy to adjust values on the fly and upload the data quickly onto the live servers!

I’ll try my best to maintain those short timeframes in between balance patches, making small adjustments here and there as they seem fit and keeping an eye on how they affect player parties. Every companion should be viable to some point, after all – maybe except the common slimes. :P

If you read the main page, you might recall me jokingly stating that I’d call the game a success once I earn enough through patreon in order to pay the server fees and - well, let’s just say my Patreon blew up after the playtest started. I’m completely astonished by the amount of people who are willing to help me get this game done! Here’s hoping that they did not only do that in order to receive faster access to the alpha… 🙃

Either way, we are way past that goal by now. Maybe making a living off of this won’t remain just a dream forever…? Thanks again to everybody supporting me on my Adventure to create this game! :)

Up next is the very first Story/Introduction Adventure for new (and existing) players! After successfully completing it, players will be able to choose between one of three Companions which will be pretty hard (but not impossible) to find later on. While the companions are already finished, the adventure itself still needs some more writing. 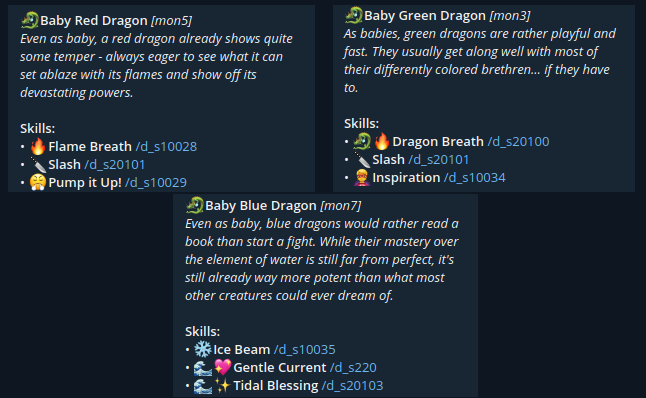 Careful observers might notice something… “odd” about their ids. 🙃

Besides that… there’ll obviously be more adventures and new gear! While players can already forage for T3 Materials, T3 gear is a bit further away - need to finish the T2 content first. One (or two?) more adventures to go!

Then there’s the upcoming end of the playtest, which will happen somewhere around early February – somewhat depending on the circumstances until then. Alpha Keys will definitely stop working once I enable the world-ending events, so that new players won’t be immediately kicked out of the game again. And just like last time, this one will be a bit more special than just shutting down the servers. Let’s see which ancient dragon god(s) we might meet this time. 🙃