Hello everyone! Welcome to this wonderful blog post, where I’m blubbering about things that happened during the beautiful month of April. Let’s start with the headline:

Delays! 😱 Who would have expected that?

If you took a look at the roadmap throughout the past month, you might have noticed that there wasn’t much happening there. That’s because the last month was pretty rough, and I didn’t get around to do much – thanks to some mistakes I made in real life. 🙃

Instead of ranting here (I tried writing up something to go into more detail, but it just doesn’t feel right to post this) I’ll just make it short: The next alpha test will be delayed by a month and thus begin in June. Sorry about that!

With that out of the way, let’s take a look at what I got done despite (or after) the circumstances this month. :)

Previously we had two different descriptions: A generic one which displays the values and how they grow per level, and a specific one for each level showing the exact amount.

With the introduction of tiers, that would have been a bit convoluted – all values can change when the tier increases, so the generic description texts would look something like “x Per Level + y Per Tier …maybe”. Obviously that’s a bit… iffy, so at this point I decided to drop the generic descriptions entirely.

Instead, the description pages can now be accessed individually for each level and tier – as an example, /d_gb1_1_2 will show the Guild Hall description for T1+2.

Additional Inline Buttons have been added to that overview, so now you can just tap a button and see what effects the next level (or tier) might yield. 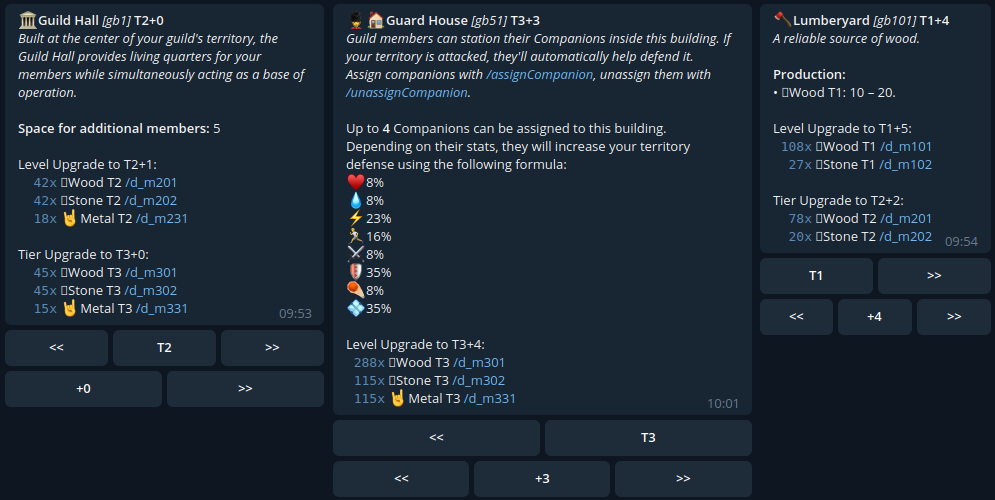 Players can now /transmute most tiered Materials into higher tiered versions – I haven’t fully decided on the ratios yet, but expect something like 6 T1 Wood yielding 1 T2 Wood. This also costs Focus but doesn’t yield any experience, so it might be a nice sink for people who don’t intend to do any “real” crafting and instead want to try to make some profits by buying cheap materials from the market, transmuting them and then selling them at a higher price.

If you aren’t… I got good news for you! Further down the road I’ll also make it possible to block private messages from certain individuals (or just everyone). Partychat will always remain enabled as there’s an easy fix to that by just leaving your party… :D

Not sure what should be the default here to be honest, as the internet is a weird place and this is mainly just a workaround for people who don’t know each other or don’t want to switch chats during adventures. Guess next up I’ll also have to add some way to report misbehaving people.

Before anyone asks: I won’t do guild chats as that would just be too many messages, and we already got separate groups on Telegram for that – just imagine a guild with 100 people actively communicating through /g xD

Fun Fact: I haven’t added any way to ban players yet, maybe I should finally do that now before it’s seriously needed…

If you’ve ever wondered “how many monsters have I slain last week?” or “just how much time did I waste mining some useless minerals?”, there’s an easy way to find answers to those questions now! 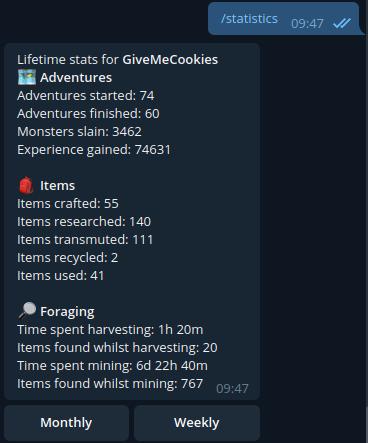 /statistics keeps track of your feats, and you can pick between viewing your weekly, monthly or lifetime “achievements”. More things to track can easily be added, and I’ll also add some Leaderboards for a selection of those stats later on.

Aaand that’s it for this month!

Oh, on a side note, somewhere within May I might start doing somewhat maybe regular development livestreams on twitch – probably while toying around with the Data Editor and adding more adventures and stuff, since coding itself might be a bit weird to watch. I don’t know when and to be honest am a bit scared of doing it, soooo the first one will more or less happen randomly once I feel in the mood to finally give it a try. See you then! :)