July Development Review – It's too ambitious!

Yup. Creating an MMORPG all on your own is sort-of a meme among game developers, so whenever I say that’s what I’m doing people give me funny looks and think I’m joking for a moment. I mean, it kinda works out for me, right? Sure, the circumstances are a bit “different” since there’s no graphics to take care of (yet?), but overall it’s still too much to do for one person.

In all fairness, I like it that way. Mainly because there’s a lot of variety in what I can do to improve the game, which in turn keeps things always fresh and interesting – so depending on my mood I can either:

But that also means I’ll have to split up my attention across multiple things. Weeks where I do a lot of server or data editor stuff mean no apparent updates (I know all of you are waiting for a better AI at this point), and creating new adventures (or encounters) is really taxing for me in general since storywriting just isn’t my strongest suit. (I still manage just fine to write long blog posts for some reason tho… It’s a nice form of procrastination :D)

If I ever collect enough money through Patreon🡕 to actually hire someone, it would probably be someone to create adventures and encounters. But right now that’s part of the daydreams, obviously. :)

A look back at July

This month there were two big features I didn’t intend to implement so early, but they seemed necessary to keep players engaged so they got a sudden priority boost:

First of all, we now have a /guildRecruitmentBoard!

Guilds can post ads, and players without guilds can now apply to guilds. Statistically, a lot of players who quit didn’t join a guild, so this was mainly moved up in priority to make guilds more accessible.

Apparently people have too much stamina, so we needed a way to burn through a stamina pool faster as it felt like a chore for some people to do 16+ Adventures back to back. Someone proposed spending more Stamina to double rewards, and I just implemented it a couple days later since it seemed like a pretty straightforward solution to that problem. This also has the side effect of significantly reducing server load: if players do only half or even a quarter of the adventures, the time they interact with the bot is also reduced accordingly. So this indirectly saves me money, yay! 🤑

From what I can see in the data, those changes worked! Retention is higher than ever: while we lost 50 players over the first month, we only lost about 30 during this month. Even less if you look at the activity over the past three days. Thanks to everyone who’s been playing the game so far! <3

That dip in the middle of the month really had me worried! So much so that I added some more stats to track active playercounts within 3 days and one week. Luckily it went right back up afterwards, apparently there was some big internet outage in Kuba during those days… ^^”

Ah, one of my biggest nightmares when it comes to telegram, hitting rate limits – two players managed to receive the dreaded 429 error over the past month. That’s two players too much for my taste! So I spent two days of research and improvements on how it’s handled internally. All messages will now get sent once the limiting is gone, and when we hit the limit, we try to squeeze in a small notification of the circumstances to the user.

There are more ways to improve on that in the future: Send them a link to a bot instance that isn’t rate limited (right now there’s @TypoTalesBot and @TypoTaleBot, both work interchangeably. Most people play with the first, and I’m wondering if we’ll ever hit the ominous “global” rate limit there if activity grows. Only one way to find out!) and just send them the messages there, for example. The best solution still would be to never get rate limited, but given how little Telegram cares about communicating those limits that’ll probably be impossible, even with the best of precautions.

While I struggled coming up with encounters for the Caldera (Lv 18), creating the Swamps (Lv 21) felt fairly easy – maybe that’s due to more recent exposure to such biomes from games I’ve played recently (Sekiro, Dark Souls and Rogue Heroes) and also some main story things that will happen there later on. The biggest difficulty (as always) was balancing: the Caldera turned out way too hard at first, with win rates hovering around ~30%. Yeah, I sort-of intend for the final adventure within a tier to be the most difficult, but that was way too low! … not that the people who already outleveled the current content didn’t deserve a little beating ;). Anyway, some nerfs later we are now hovering at about 75%, which seems really fine to me. Swamps where okay, I just overdid it with a certain surprise attack. 🙃

In the near future I want to add more encounters to already existing adventures and have story adventures branch out more broadly than just “option A for dialogue 1, option B for dialogue 2”. In order to achieve this without going insane, I really needed a better Editor for Adventures. Before this change Encounters where separated from Adventures – that makes sense for those that (might) get reused across adventures, but story encounters or other specific encounter chains are really cluttering the overview. My goal was to have an expendable overview grouped by Adventure for those adventure specific encounters. Guess a picture is better at explaining things, so let’s marvel at this beautiful evolution for a moment: 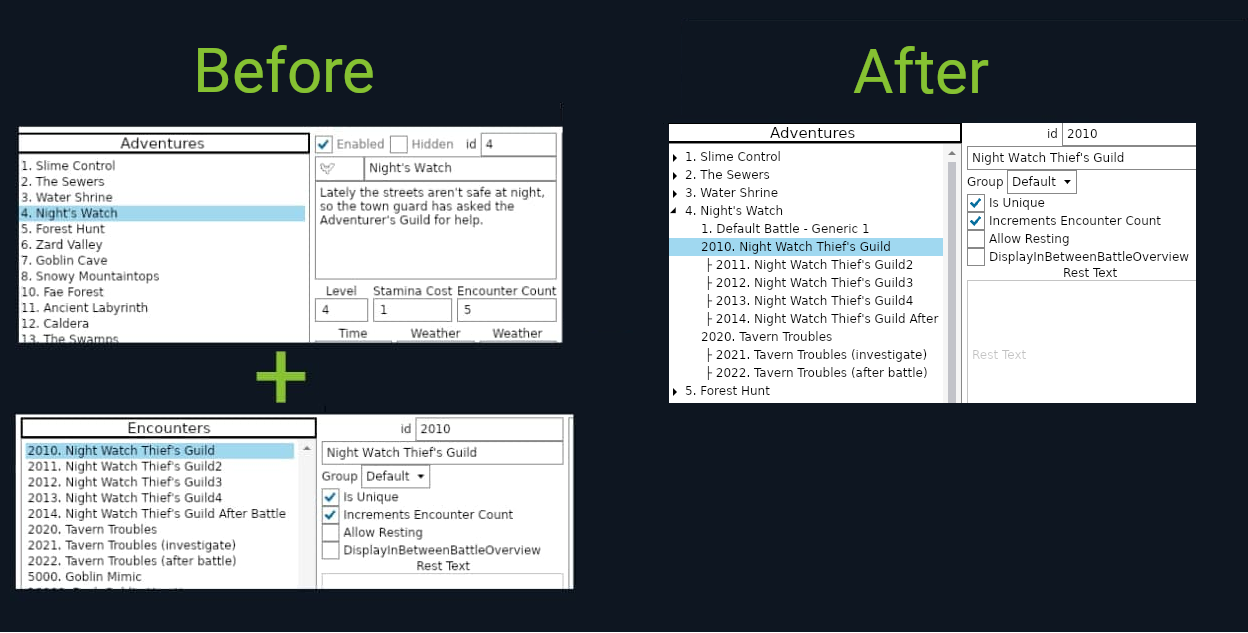 And there’s more changes to come. 🙃

A look ahead into August

Initially I intended for the playtest to end by the end of August, but… as always, that will be delayed into September (or even further)! Nonetheless, I’ll add more story adventures that’ll eventually lead up to the final encounter that’ll end the world in a more epic way than last time.

The next month will include a lot of quality of life improvements, more Accessories, some of the aforementioned Story adventures and maybe a new weapon type (that’s a big maybe.). I can’t really spoil too much this time as there aren’t many big features to talk about (sadly), but I hope we’ll reach level 30 in terms of adventures and thus also T4 stuff. Also, AI improvements, anyone? 🙃

So that’s it for this month! I hope you enjoyed your stay and have a wonderful time in August!