Hello there! I hope all of you had a wonderful April Fools’ Day yesterday. :D

I just had a super productive month! Let’s talk a bit about all the changes taking place during the downtime. :)

Early this month I reworked the way how the strength of companions assigned to a guard house is calculated: instead of just taking the level, it now instead uses a weighted percentage of the individual stats, so some companions (especially those with high defensive stats) will be more useful than others. Levels will increase the stat ratios, whilst the tier increases the amount of companion slots the building has. Other Guild Buildings in the future will also use this to determine the effectiveness of assigned companions.

The biggest feature this month might have been guild roles, and I’m proud of the result! x)

Most Players asked to set up Co-Leaders for their guilds. That’s obviously a good idea, so I added that – and way more, embracing the feature creep because it was just fun to add. So let’s go over this little quality of guild-life improvement. :D

With how the system is implemented, it’s very simple to add new permissions over time as needed. Commands which earlier just checked whether the player was the guild leader will now instead check if their role has the required permission set up.

Obviously this also included a bunch of UI work – Listing all roles, providing editors for roles… But I feel like I’ve reached a good spot now. At first glance it might seem like an emoji bloodbath, but given that each role has its own emoji I think that it conveys the information pretty well. Here are some impressions: 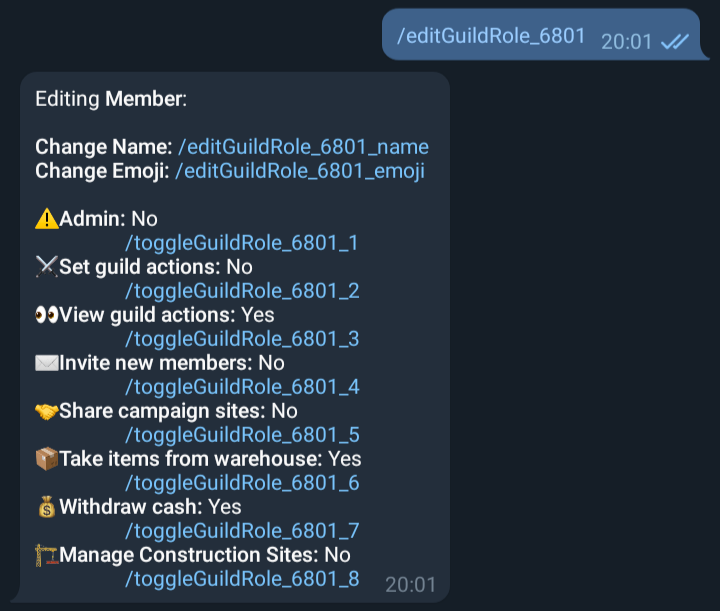 Additionally, roles will now also be shown in a players /playerInfo (which now replaces the former /whois):

There was an easy trick to quickly grind SoulLevels – just having a friend or two feeding all their unneeded materials to you and then using /research to gain massive amounts of exp for free – that’s still possible, but now it’s somewhat limited: Crafting now is limited by Focus, which works pretty much like Stamina – Recipes will cost Focus, and it regenerates over time, although at a much faster rate and with a much higher limit.

The internal data editor received a lot of small changes and improvements – the biggest is probably replacing simple Dropdowns for item Selections with a proper Dialogue PopUp – to be honest, I have no clue how to explain it, but it’s magical and makes editing things so much easier because I can just search things by entering text instead of scrolling through an endless list of items. Here’s the thing in action:

Aw man, this took way longer than expected! I sort of underestimated all the things which would be affected by this, as literally everything even remotely connected to guild buildings needed to change in some way to make this work. While at it, also had to redo the whole building editor. But now it’s faaancy!~

In general, buildings now have tiers and levels. Both construction & production materials are tied to tiers, while tiering up non-production buildings like the warehouse will in most cases increase the received bonuses per level. Guardhouses are an exception here, as increasing their tier will increase the amount of companions you can place inside, whilst increasing their level increases the stationed companions stat boosts.

I’m still not entirely finished here – the new building descriptions are still missing, but should be done by the end of this week.

A look back: Learnings from this Playtest

A total of 144 players joined us while the last playtest was running – at it’s peak, we had about 110 active players within 24 hours. That’s a lot! In the end user counts decreased again, with only 74 witnessing the end. I guess that’s mostly thanks to the lack of new content around that time.

Looking a bit more at the data I’ve collected, I was able to make the following observations:

…so yeah, as to be expected, this game mostly relies on the social experience right now. I’ll need to add more ways for new players to find a guild early on (Guild Ads and a Guild Search, maybe) and try to make it more interesting without one (story, more adventures, more encounters & lore) in the future.

Finally, a look into the future

The remainder of this and next week will mostly be centered around quality of life improvements: better commands & help texts, a way to track your buffed stats in battle, simple stuff like that.

In a bit more than three weeks the Game Mixer (an international game development program I’ve joined since February) finally comes to a close, so I’ll be ably to focus my attention completely on TypoTales once more. Let’s just say it has been pretty exhausting.

Afterwards, I’ll work on bigger features once again, including some simplified form of PvP Encounters – but don’t get your hopes up too high, those will be asynchronous, meaning the player parties you face will be AI controlled. Players who witnessed the end of the last two playtest might already have noticed something in one of the final adventures. ;) Besides that, companions will receive rest actions and friend referrals will finally be rewarded in some form.

Anyway, that’s it for this month’s blog post! See you for the next one in May. :)